A Lexicon of Scholarly Editing

9. February 2015 · by bookhistorynetw · in Guest Posts, Projects · Leave a comment

The Lexicon of Scholarly Editing (#LexiconSE on Twitter) is an open access academic resource that offers definitions for contested concepts in the fields of Scholarly Editing and Textual Criticism from a variety of languages. Affiliated to the European Society for Textual Scholarship, the Lexicon was developed at the University of Antwerp‘s Centre for Manuscript Genetics as part of my work as a PhD student on the ERC project titled ‘Creative Undoing and Textual Scholarship’, supervised by Dirk Van Hulle.

The Lexicon aims to be a useful resource for anyone who is interested in Textual Criticism in general – be they students, early career scholars, or experts in the field. Rather than writing new definitions for these concepts, the Lexicon gathers definitions from academic journals, monographs, and the like. These definitions are grouped together under an English lemma, but are rendered chronologically in their original language. As such, the Lexicon aims to reveal the lively multilingual debate these concepts have spurred in the field. This way, the passages quoted in the Lexicon can be used to develop a better understanding of certain problematic concepts in the field; to discover what those concepts are called in different languages; and to help textual scholars develop more nuanced arguments in their own writing. 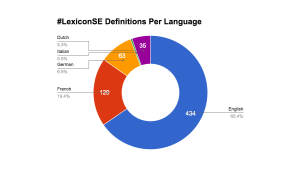 Officially launched on 19 November 2013, the Lexicon currently counts 664 definitions gathered from 76 different academic sources, spread out over a total of 361 different lemmata. Although the Lexicon’s definitions are still predominantly taken from sources written in English, we make an effort to include materials from other languages as well, to turn the Lexicon into a truly multilingual resource. As a result, the Lexicon currently includes definitions in five different languages: English, French, German, Dutch, and Italian, and hopes to offer even more diversity in this respect in the future.

To achieve this goal, however, the Lexicon can always use a little help. That is why we actively encourage scholars to contribute to the website by suggesting new definitions, entries, and source materials. So if you are reading an academic text, and you come across a definition that should be added to the Lexicon (or recall one of your own definitions that was published in a journal or monograph), please do not hesitate to let us know. You can suggest a definition by completing our contact form, or by registering as a contributor and adding the definition to the Lexicon yourself.

Finally, I would like to draw your attention to the fact that the Lexicon’s bibliography can also be consulted on Zotero, via a public group called Lexicon of Scholarly Editing. Besides a list of all the sources that are in the Lexicon, this group also features an extensive ‘To-Do List’ that contains a range of scholarly texts that should still be checked for definitions. Please feel free to join the Lexicon’s Zotero group and treat it as a recommended reading list; to suggest texts that should be added to the ‘To-Do List’ (either via Zotero or via email); or to tackle one of the texts in the list yourself.

... draws attention to projects in book history and print culture originating in German-speaking areas as well as to research by international scholars with a distinct focus on German-regional issues. It features news, conference announcements and reports, project descriptions, as well as short essays.