The Alpen-Adria University (AAU) of Klagenfurt recently hosted the fifteenth annual conference of the International Society of Book Studies (Internationale Buchwissenschaftliche Gesellschaft [IBG]), organized by Ao. Univ.-Prof. Dr. Arno Rußegger from the department of German language and literature studies at the AAU. In Klagenfurt, a new research focus on literature for children and young people has been developed. In this research area, the picture book with its central position in children’s culture plays a decisive role. Thus, these books for very young children were the topic of this interdisciplinary conference, which dealt with the intermediality and interactivity of the medium.

Tobias Kurwinkel (Bremen) opened the conference with a demonstration of the visual hybridization of picture books in new media formats. This transformation from storybook to other media (Jens Thiele used the term “dissolution of boundaries”, German “Entgrenzung”) has led to a blending of forms, categories and genres. Amongst others, Kurwinkel cited Spike Jonze’s film adaptation of Maurice Sendak’s famous Where the Wild Things Are as an example of media change. In summary, he considered today’s storybooks as a medium to observe the dissolution of boundaries and called upon the audience to focus on the media combination of picture books in future research.

Transition phenomena from analog to digital media formats were also the subject of Michael Ritter‘s (Bielefeld/Halle-Wittenberg) paper. He focused on recent picture book apps and discussed how technologically founded traditions of “paper thinking” are taken on by new media formats. In this context, he criticized the fact these book apps for young children don’t yet capitalize on the possibilities of new media, because they still are oriented towards the printed book. As an example, Ritter referred to the app’s animation of a book’s turning pages and folding edges. From this interplay between paper-based and screen-based book and lettering culture, he deduced that Thiele’s definition of picture books (namely that they are identifiable by their material: paper) is antiquated today.

Margarete Erber-Groiß (Vienna) followed up on the topic with her talk about her picture book cinema project. She introduced the concept of wienXtra-cinemagic, using picture books as a stepping stone for a movie experience for the very young. Since 1999, her company in Vienna has offered cinema performances of selected storybooks for nurseries and families. The program is presented live with a narrator and a musician in the cinema, so that the children ages three to seven can experience a special media performance. By now, forty books have been adapted; the images are shown as a slideshow – and the narration/music accompanies the slideshow. Erber-Groiß emphasized that children need time to look closely and discover details in the pictures on the big screen instead of having to navigate hectic cuts and overcharged moving content.

In the evening, delegates were invited to Silke Rabus’ (Vienna) address/lecture on the occasion of the exhibition “The Element of Time in Picture Books” at the Alpen-Adria-Gallery Klagenfurt, which featured illustrations by Quint Buchholz, Willy Puchner and Lisbeth Zwerger. In an animated talk with many examples, Rabus demonstrated vividly how time is illustrated in the oeuvre of these three successful illustrators. 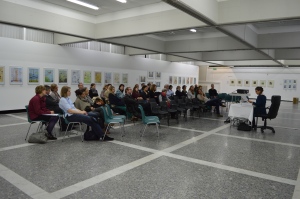 The next conference day started with a section about special forms or related genres of picture books. Wolfgang Reichmann (Klagenfurt) spoke about Graphic Novels. The term has been applied to a special type of comic strips for adults. But the simple distinction between allegedly trivial comics for children and a high literary graphic novel for adults is – according to Reichmann – problematic, because there is a smooth transition between comics, graphic novel, picture story and picture book. Based on this conceptual indecisiveness, he declared the graphic novel an art form, which is characterized by its experimental transgression of conventions in form and content, by its conflicting target audiences, genres, categories and media.

A special genre of picture books – nonfiction – was presented by Renate Grubert (Munich). In her practice-oriented talk, she first offered a brief historical overview of the nonfiction picture book. She then introduced the most important German-language series in this genre (for example How and Why, German Was ist was? and Wieso? Weshalb? Warum?). On the basis of sales figures, Grubert revealed that the market for nonfiction story books is incessant or even rising, whereas the market of nonfiction books remains stagnant. Therefore some nonfiction publishers have begun to approach a younger audience. Calling up ideas discussed during the previous conference day, Grubert named the buzzwords “activity”, “cross media” and “ebook/apps” as trends in nonfiction picture books.

Another special form of picture books is the Pixi book, published by the German publisher Carlsen. Due to their huge popularity and sales figures, the term “Pixi” is used today in many places as a synonym for miniature books. On the occasion of the sixtieth birthday of these books (the first German Pixi book was released in 1954), Corinna Norrick-Rühl (Münster) and Anke Vogel (Mainz) have started to explore the largely uncharted history and perception of the famous Pixi book. In her paper, Norrick-Rühl presented the successful media diversification of the brand Pixi by using numerous examples. Special attributes of Pixi books are the small trademarked format (10 x 10 cm), the low price of sale (0,99 Euro), their collectivity, their distribution (in sub-series of 8 titles) and their recurring characters (for example the popular character Conni).

Individual picture books and their way of telling a story for children were introduced in the papers held by Sabine Fuchs (Graz) and Annika Wille/Arno Rußegger (Klagenfurt). Fuchs demonstrated the conceptual transformation of Franz-Joseph Huainigg’s text Meine Füße sind der Rollstuhl [Engl. transl.: My feet are my wheelchair] in two different versions (1992, illustrated by Annegret Ritter, and 2003, illustrated by Verena Ballhaus). As an example for a consideration of narrative structures in storybooks, the author Annika Wille presented her mathematical and interactive picture book Ein Dreieck, ein Viereck, ein Fünfeck, was nun? [Engl. transl.: A triangle, a rectangle, a pentagon – and now what?], which met with the approval of Rußegger, who analyzed the set-up of the story.

The final section dealt with cross-cultural and cross-generational phenomena. Peter Svetina (Klagenfurt) focused on the presentation of the hat as a civil symbol in Slovenian picture books of the twentieth century and asked whether political and social change after the Second World War influenced the appearance of hats in the reviewed picture books.

In her paper, the scholar and journalist Marlene Zöhrer (München) disproved the assumption that picture books are only for children. Because of their role(s) as consumers and readers, adults are the secondary target group of storybooks. Thus, publishers offer different kinds of reading for children and adults in the same book (multiple levels of address). According to Zöhrer, there is also a growing number of picture books which address adults specifically without alienating the child reader. She called these books “open-addressee picture books”.

The conference highlighted the picture book as an ever-changing medium without boundaries that accommodates itself to the technological change of digital media and continuously opens up to new formats and readers. Simultaneously, however, the picture book has stayed the same over the centuries: as the first book for a child.

... draws attention to projects in book history and print culture originating in German-speaking areas as well as to research by international scholars with a distinct focus on German-regional issues. It features news, conference announcements and reports, project descriptions, as well as short essays.